October 16, 2017— On Thursday, the European Union (EU) and UK concluded their fifth round of Brexit negotiations. At this point—sixteen months since the Brexit referendum vote—six months since the invocation of Article 50 (to formally start the two-year clock for Brexit negotiations)—and several rounds deep into negotiations—one would think the two sides would have made more progress on key issues. However, most questions remain unanswered, and the official separation date of March 2019 gets closer and closer. Despite the great deal of uncertainty that remains, our view is that the more dire economic and market predictions for the UK and EU will not be realized, and we continue to favor non-U.S. developed market equities in client portfolios.

Ironing out the details

At this juncture, there are three main issues pertaining to the EU/UK “separation” that must be answered before the two groups can move on to the second phase of negotiations: deciding upon the transition, and future relationship between EU countries and the UK.

1)     The bill – All EU members must pay toward membership, covering things like support for weaker economies and pension liabilities for EU civil servants. Upon leaving the EU, the UK is being asked to pay a financial settlement, with estimates ranging from between €30 billion and €100 billion (1 Euro = 1.17908 U.S. Dollars). The UK is negotiating to pay as little as possible, and the EU is refusing to move on to other discussion topics until an amount is agreed upon.

2)     Citizens’ rights – There are currently millions of EU and UK citizens living and travelling freely between mainland Europe and the UK. Much of the Brexit campaign centered on immigration and a desire for tighter borders, so securing travel and worker rights for UK and EU citizens can be contentious.

3)     The Northern Ireland border – Brexit will result in the UK leaving the EU, but Northern Ireland will remain part of the trade bloc, resulting in a shared physical border between the UK and EU. Prime Minister May has insisted there will be no physical infrastructure at the Irish border, but how exactly to monitor the flow of goods and people across this border is part of preliminary discussions.

Unfortunately, until the EU reports that sufficient progress has been made on these initial issues, talks on the future relationship (one of the most important of which is trade) are unlikely to move forward in earnest. The situation is further complicated by the tenuous nature of British politics. Prime Minister Theresa May’s position has weakened over the course of the year, particularly since her Conservative party lost their parliamentary majority in the June snap election. It is unclear whether May will remain Prime Minister, and if she does not, who would replace her. A leadership change prior to coming to terms with the EU on material negotiating topics would leave room for a considerable shift in Brexit strategy—a scenario that would likely be met by investor risk aversion.

Thus far, Brexit-related uncertainties have been felt most by increased volatility in currency markets. The pound has strengthened so far this year but remains about 10% weaker compared to before the June 2016 referendum. Recent pound strength is likely due to stable UK economic data (better confidence and capital expenditure data than most expected this year) and pass-through inflationary effects of the weaker pound. UK inflation is approaching 3% year-over-year, as of August, increasing speculation that the UK Monetary Policy Committee will hike interest rates at their next meeting in November. UK equities have held up well so far this year, despite political uncertainty, up over 13% after accounting for the strength in the pound versus the U.S. dollar. In our view, a fair amount of uncertainty is already priced into UK equity and currency markets, limiting downside from additional political risk. 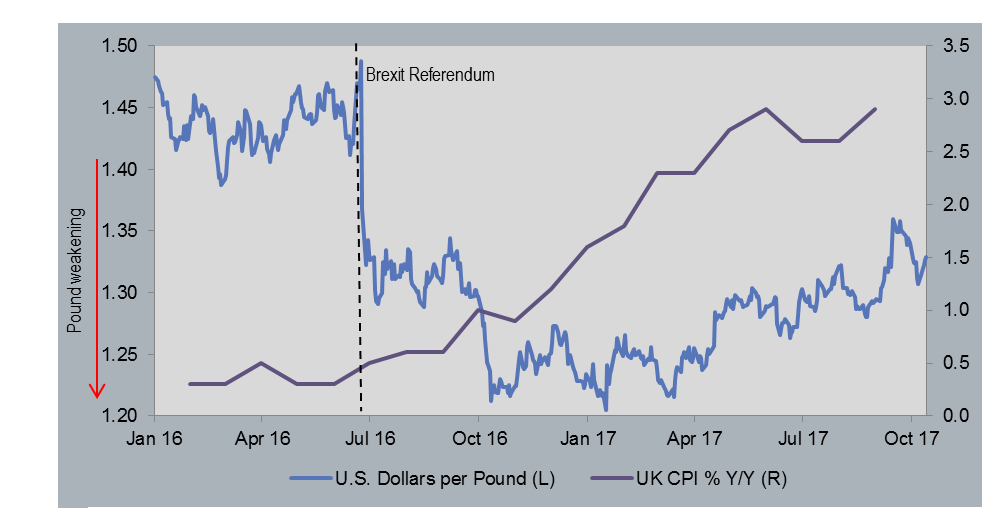 Going forward, there are a variety of potential scenarios that could play out, from a leadership shake-up in the UK resulting in a shift to a “hard Brexit” (i.e., UK foregoing access to the EU’s single market without a new trade deal in place and limiting free movement of people across borders) to a parliamentary vote to suspend Article 50 (unlikely, in our view). Many studies predict a hit to UK GDP for years to come from higher inflation crimping spending power, inhibited trade, and reduced capital investment. The IMF has repeatedly revised downward their expectations for UK growth in coming years, most recently to 1.7% GDP long-term growth. In the IMF’s estimation, Brexit has resulted in the UK dropping from one of the fastest-growing economies in the Group of Seven (“G7”) rich nations to one of the slowest.

Importantly, we view any fallout as unlikely to spill over into the EU or broader global economy.  Roughly half of UK trade is with the EU (around 44% of exports and 53% of imports in 2016). However, only about 8% of EU exports go to the UK (this number rises to 18% if you exclude intra-EU trade). The Eurozone (different from the EU in that it includes only the seventeen countries sharing the common currency) has shown robust economic growth this year, with GDP growth of 2.3% year-over-year through the second quarter and a positive trend in lending to consumers and non-financial corporations. We believe the Eurozone has enough positive momentum to withstand a slowdown from the UK, should that materialize.

We continue to see evidence that Europe is still in the early stages of the economic cycle. Despite risks associated with Brexit, positive momentum of European confidence, economic activity, and lending, we are left with a constructive view of the region and an overweight position to non-U.S. developed equities.