October 29, 2018— The days are ticking down to what will likely be one of the most consequential elections in midterm history. Votes cast on November 6 could result in a change in control of Congress and help determine the national agenda for the next two years or even longer. In light of the impending election’s importance, Wilmington Trust/M&T Bank co-sponsored an exclusive midterm preview event, hosted by and streamed live from the Washington Post in our nation’s capital.

We sponsor events like these because, as our Vice Chairman Kevin J. Pearson said in his introduction, “Much of our role as a trusted financial advisor is to deliver the absolute best and most useful information and analysis to our clients.” (To that end, you may also want to hear our quarterly conference call on the midterms as well as the recent market volatility; go to wilmingtontrust.com/call for more details and replay info.) The evening’s conversation was lively, featuring a distinguished and bipartisan panel of political notables, policy experts, and journalists. I share with you now just a few of the highlights, along with our insights on the issues raised.

In the first segment, Post columnist Karen Tumulty interviewed former House Speaker Newt Gingrich, who was the architect of the Republican takeover of the House of Representatives in 1994—the year the GOP gained an incredible 54 seats and took control of the House for the first time in 40 years. He gave an expectedly confident assessment of the GOP chances to prevail on November 6 and pointed to some of the differences between 1994 and 2018. The fulcrum of the GOP’s triumph back in ’94 was the Contract With America, which focused on smaller government, lower taxes, and greater business activity as opposed to some of the more controversial subjects. When asked if there was a way back to that type of political victory, he pointed to President Trump’s issue-oriented campaign clarity on economic growth, changing trade policy, appointing Supreme Court judges, etc.

If the Democrats were to take back the House on Election Day—as we and others predict will take place—Gingrich postured that, in looking forward to 2020, they need to decide if they want to be the party of better ideas or the party of investigations (a clear reference to President Trump’s tax returns and ties to Russia), but that the system won’t allow both.

And then we heard from the Senator…

The following segment featured Libby Casey, the Post’s politics and accountability on-air anchor and Democratic Senatorial Campaign Committee Chairman Sen. Chris Van Hollen (D-Md.) He feels that top of mind for those going to the ballot box will be healthcare, in particular, protections for pre-existing health conditions. Further he stated that, although the GOP claims it agrees, Republicans voted against this protection under President Obama when they sought to overturn the Affordable Care Act.

The senator also discussed the $2 trillion that was added to our national debt as a result of the tax cuts and the predicted call from Republicans for cuts to programs like Medicare, Social Security, and Medicaid. He believes voters want legislators who are going to stand up for their states and hold the president accountable if the proposal is not good for their state, such as tariffs’ effect on those in farm states which he feels have been very harmful to the economy.

The final segment of the evening featured a discussion with Neera Tanden of the Center for American Progress and Matt Schlapp of The American Conservative Union, moderated by Dan Baltz, chief correspondent for the Post.

They began by discussing expectations for the way forward in terms of policy if we end up with a divided Congress. Shlapp maintained that there wouldn’t be much of an impact on how we fund the government because congressional gridlock would be the likely scenario. Shlapp feels the main difference is it will even further exacerbate the hostilities and contentiousness that already exists—that, plus the Democrats will start announcing candidates for president.

Tanden sees a ray of light in one of the issues on which Trump campaigned: an infrastructure package. She emphasized the potential significance of the fact that any of the Democratic candidates are new to Washington, which could give them a fresh, useful perspective, particularly on issues like political reform. Like Gingrich, Shlapp is optimistic and thinks that a House win will be a nail-biter at best and that Republicans will see a resounding triumph in the Senate.

Potential outcomes, as we see them…

These are some of the issues that will drive voter turnout. As for some of the potential outcomes, the most likely scenario is the Democrats taking control of the House while the Republicans maintain control of the Senate, or the Gridlock scenario. That brings a high likelihood of House committees bringing more investigations and stalling on Republican legislation. Although there would be split control on Capitol Hill, there are some areas where the parties could work together, in particular on an infrastructure package, as well as staying tough on the Chinese trade situation. Most importantly, this is the scenario that is likely priced into markets right now, and would in our view have the lowest chance of moving markets sharply in the short term.

In the lower chance case of Republicans maintaining full control of Congress, the Red Wall, we believe markets would get bullish on the prospects of continued success for President Trump’s policies such as deregulation, lower taxes, and healthcare reform. If a Blue Wave sweeps the polling booths next week, we believe there is a higher chance of markets being spooked by higher spending policies or even more investigations of the White House, which likely would lead to higher market volatility going forward.

What midterms could mean for markets

There are numerous macro- and sector-related implications of the elections

On one point we certainly agree with Van Hollen: turnout will be both critical and big. Interestingly, he mentioned the fact that Democrats typically have greater drop-off in voting for presidential elections to midterms vs. Republicans. This time, however, Democratic voter enthusiasm seems rampant, possibly reversing the multi-decade trend of registered Republicans turning out in higher numbers.

Midterm elections are all about turnout 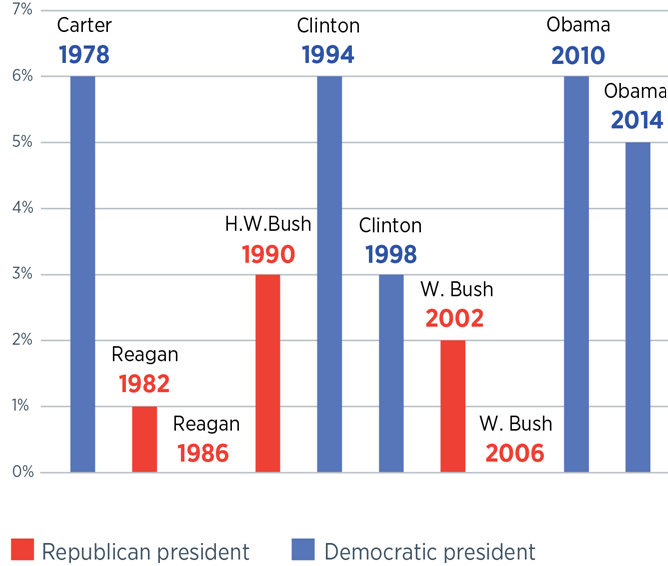 For us at Wilmington Trust, I will say this: If there’s one thing we learned on Election Day in 2016, it’s that it ain’t over ‘til it’s over. Predictions are just that. We plan for what’s probable but also prepare for what’s possible. Our economics-led investment process keeps us from being overly wed to any single influence and, this above all, we stay vigilant in monitoring markets and all the important forces that weigh on asset classes, standing ready to make adjustments when prudent.

Did you miss our Capital Perspectives conference call on October 29, 2018 at 2:00 PM EST? Members of our investment team’s senior leadership addressed the recent market volatility, as well as, the upcoming midterm elections. Listen to the replay.

Any investment products discussed in this commentary are not insured by the FDIC or any other governmental agency, are not deposits of or other obligations of or guaranteed by M&T Bank, Wilmington Trust, or any other bank or entity, and are subject to risks, including a possible loss of the principal amount invested. Some investment products may be available only to certain “qualified investors”—that is, investors who meet certain income and/or investable assets thresholds. Past performance cannot guarantee a profit or ensure against a loss. Investing involves risk and you may incur a profit or a loss.