August 29, 2017— The topic of immigration is frequently in the news though typically with a focus on illegal immigration and the politically charged issues of a wall on the southern border, deportations, and the Deferred Action for Childhood Arrivals (DACA) policy, to name a few. We took note recently when two senators, Tom Cotton (R-AR) and David Perdue (R-GA), proposed legislation to affect legal immigration, a plan that was endorsed by President Trump. The legislation would significantly reduce the amount of immigration that is based on family connections and introduce a “skills-based immigration points” system with points awarded for education, English proficiency, job skills, age, and entrepreneurial investment. Importantly, the bills’ sponsors are seeking a 50% reduction in overall immigration levels. Although the chances of the bill’s passage in its current form seems remote, it is important to consider the importance of immigration for long-term economic growth, which is intimately tied to long-term performance of related asset classes.

The proposed policy reminds us of the importance of labor force growth for long-term economic growth, which we highlighted in our 2016 Capital Markets Forecast (CMF). Specifically, an economy’s long-term growth rate is the simple sum of two things: the growth rate in the labor force (the number of workers) and the growth rate in the productivity of those workers. Demographics in the United States don’t bode well for the first component because the net natural increase of the population (i.e. births minus deaths) is projected to slow considerably, which would weigh on labor force growth.

As we pointed out in 2016, Europe and Japan have very low population growth compared to the U.S., as birth rates are lower and immigration is lower too. This is part of the reason behind corresponding lower GDP growth rates for Europe and Japan relative to the United States. Although population growth has been stronger in the U.S., the Census projects a slowdown in the decades ahead, partly because of the aging baby boomer generation. Whereas 12.4% of the population was in the 65+ age range in 2010, that age group will comprise 20.6% of the population by 2030. As shown in the figure below, projections of future population growth are for an overall slowdown and heavier reliance on immigration.

Census projections for the U.S. show the rate of population increase falling from 0.8% in 2017 to 0.5% by 2060. If the U.S. population were to grow only by net natural increase, population growth would fall to just 0.1% by 2060. This means that immigration is expected to play a key part in driving population growth and by extension in propping up labor force growth. By the year 2023, the share of growth coming from immigration is projected to surpass net natural increase.

Reducing immigration by half would push down average annual population growth between 2017 and 2027 to approximately 0.6% from 0.8%. Assuming a steady rate of labor force participation, this points to an average annual loss of 0.2% of GDP, which may seem small but looms large when compounded over a decade. In our 2016 CMF, we estimated current steady state economic growth at 2.25%, but highlighted that slowing labor force growth due to demographics alone would weigh on long-term GDP, pushing the forecast down to 2.0% over time.  Any cutbacks to immigration would further exacerbate the impact of an already declining labor force. Our calculation indicated cutting immigration in half would lower long-term economic growth to 1.8%. 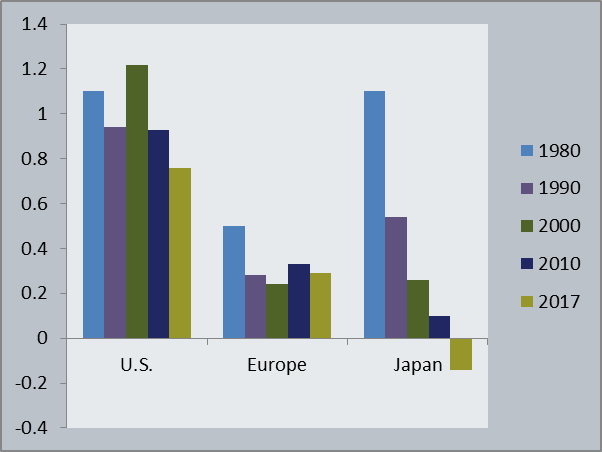 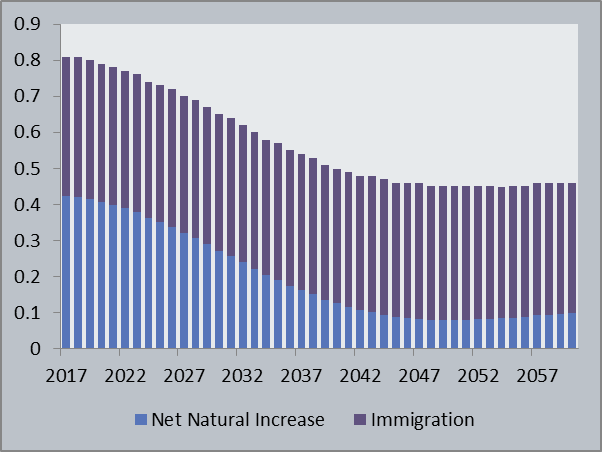 Of course, that is all assuming no change to the other component of growth: productivity. The authors and supporters of the legislation believe the lower immigration levels and the introduction of the points system will lead to higher wages for “all working Americans” and presumably for the incoming immigrants who have been screened for education and work skills. Although not stated so specifically, this is an argument that worker productivity would be increased as a result of the legislation. We are relatively optimistic about productivity as we stated in the 2016 CMF. Our analysis indicates the U.S. is set to bounce back from the multiyear lack of productivity gains which we believe was tied to a dearth of capex from companies thus far during the recovery. This has already started to turn around. We expect productivity to rise modestly in the next decade, but don’t think it will be enough to boost long-term economic growth to the 3%-4% range we have seen in some decades past. The legislation would likely push up average productivity of new incoming immigrants on the margin, though this is extremely challenging to quantify and we doubt would push overall productivity growth high enough to make up for the loss in labor force growth.

In our 2016 CMF we projected a slowing growth rate for the U.S. economy over the long term as the growth rate of population and labor force slowed. In our long-term strategic asset allocation this led to relative optimism for emerging markets economies that are set to have stronger long-term growth. If legislation significantly reduced the projected path for U.S. immigration and by extension reduced the anticipated growth rate of the population, we would likely reassess the long-term outlook, and reduce the outlook for U.S. economic growth.