December 20, 2021 – As I’ve watched the Federal Open Market Committee (FOMC) of the Federal Reserve get more hawkish over the past months I’m reminded of my days playing lacrosse, specifically being back on defense. When your opponent has the ball you should be in a ready position with your weight on the balls of your feet, evenly distributed, and be ready to react to your left or to your right depending on which way the attacker moves. Lastly, if you have any reason to think your opponent is more inclined to go a particular direction, you set your defensive posture with that bias in mind, turning your body to that direction.

At the December 15 meeting the FOMC turned its defensive stance in a significant way, with a strong bias that its opponent (inflation) is far more likely to accelerate than decelerate, positioning the committee to hike rates earlier than previously anticipated. Perhaps counterintuitively, equity investors enthusiastically endorsed the move on the day of the announcement sending the S&P 500 up 1.6% with all gains coming after the conclusion of FOMC meeting and Chair Powell’s press conference. Meanwhile the Treasury market barely budged, as the Fed’s moves were already baked in.

The Fed is not alone. The European Central Bank (ECB) is facing less urgency but similarly shifted its stance last week by laying out a glide path to decrease its own QE program. The Bank of England (BOE) is a step ahead, becoming the first large, developed economy central bank to hike rates last week. Meanwhile the Bank of Japan (BOJ) and People’s Bank of China (PBOC) are in easing mode.

We do expect earlier rate hikes from the Fed than we did just a few months ago as the recent inflation data has come in hotter than anticipated. However, we do expect inflation will slow in 2022 and the degree of that slowing is paramount in determining how the Fed reacts. Whether the first rate hike comes in early-, mid-, or late-2022 we think the pace of hikes thereafter is more important and we don’t think they will move so quickly as to end the economic recovery. In any case, they’ve set their stance just in case.

Just six weeks ago the FOMC made its first moves by slowing, or “tapering,” the rate of asset purchases known as Quantitative Easing (QE). At the initial taper pace it would have taken until June 2022 for QE to come to an end giving them the option to start raising rates at that time. Now the committee has doubled the pace of the taper which should end all purchases in March 2022, giving them the option to start hiking rates earlier than before. At the same time, the newest economic and interest rate projections from FOMC members changed substantially with higher inflation forecasts and 12 out of 18 thinking at least 3 rate hikes (of 0.25% each) would be appropriate in 2022.

Grey dots show individual participant assessment of the appropriate level of the federal funds rate at the end of each year shown.

Orange dotted line shows the level given by the median participant in each year.

Data as of December 15, 2021. Source: The Federal Reserve and Macrobond.

Barring any major surprises the winding down of QE by March would have the Fed’s overall balance sheet plateau at roughly $8.9 trillion as shown in the figure below, more than double the $4.2 trillion level from just before the pandemic. Whenever the rate hikes begin, our baseline expectation is a 0.25% hike each quarter, which could bring the federal funds rate to 2% by the end of 2023. Clearly there are countless unpredictable external forces, from COVID-19 to fiscal policy, as well as economic developments in the labor market and inflation, that could alter the trajectory. We don’t expect the Fed to be forced to hike in such a way that would derail the economic recovery next year. The main determinant will be the path of inflation and long-term inflation expectations. 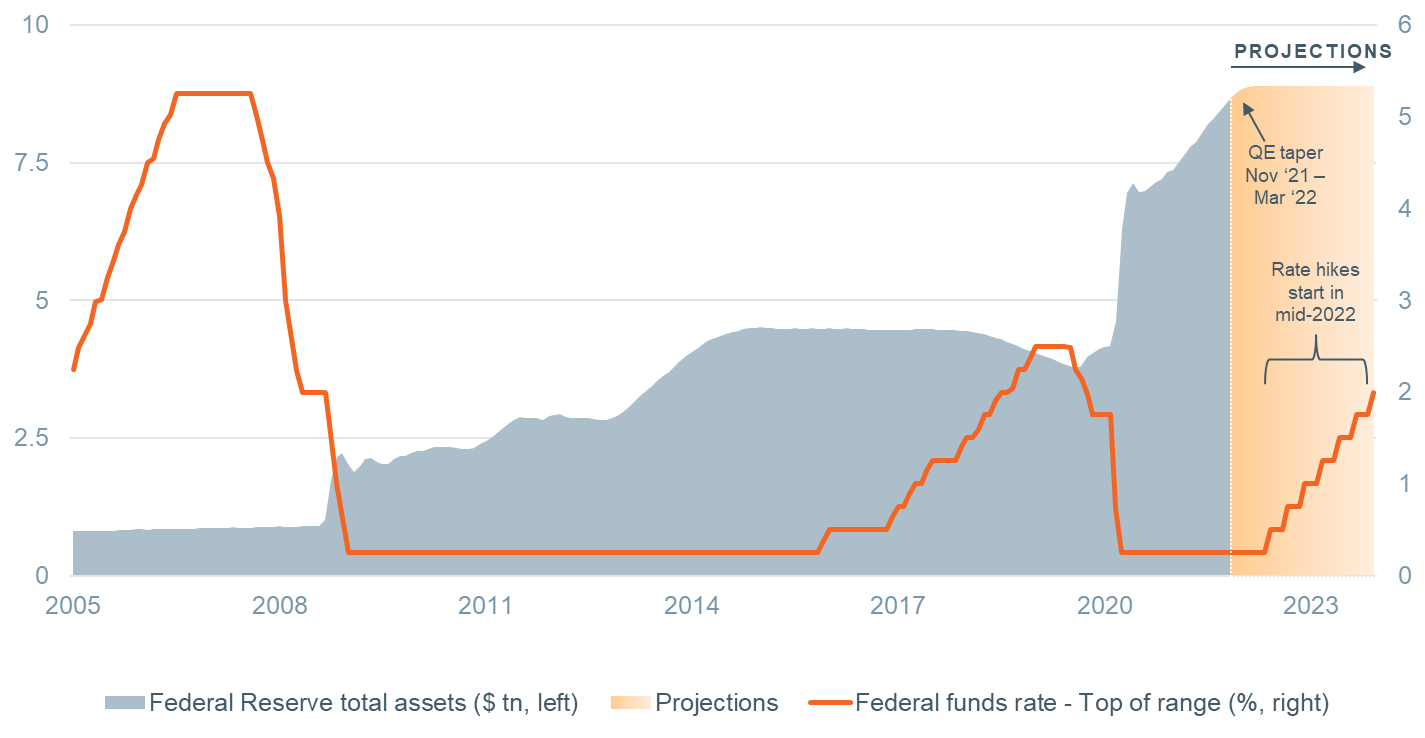 Sources: Data as of December 3, 2021. Federal Reserve Board of Governors, Bloomberg, WTIA.

The shift in defensive posture by the FOMC is mainly in reaction to the persistent rise in inflation but also to better than expected recovery in the labor market. Chair Powell gave a rare peek inside the mind of a Fed chair, giving play-by-play description of his change in view during his post meeting press conference. He described how the successive releases of three data releases (Employment Cost Index (ECI, Oct. 29), jobs report (Nov. 5), and a “very hot” consumer price index (CPI, Nov. 10)) convinced him of the need to adjust their stance, even going so far as to say he considered a faster initial taper at the November 3 meeting “for a second there” after the ECI release.

The shift in stance by Chair Powell and the overall FOMC is understandable given the steady increase in price pressure over the course of 2021. The figure below shows a special calculation of CPI inflation called the “trimmed mean” which we think does a superior job of showing underlying price pressure compared with the more widely known “core” measure.[1] It shows steadily building price increases at rates never seen before. It is the consistent advance of these underlying measures that have gotten the attention of the Fed more so than the one-off surges in small components (hotels, airfare, used cars) in the spring.

The key questions are 1) whether inflation decelerates in 2022, and 2) to what degree. With the overall CPI running at 6.8% y/y in November, there is broad consensus that inflation will slow next year. We think inflation will slow to 3.0% in 2022 as the economy decelerates, the impact of two massive 2021 stimulus packages fades, and supply chains improve. The trimmed mean measure decelerated in November but we need to see more of that to declare a trend. Encouragingly, shipping costs suggest we’re past the worst of the problems, with the Baltic Dry Index falling more than 50% since a peak in early October and Drewry’s container shipping index down more than 10% since late September. Though we expect a sharp deceleration of inflation, the risk is to the upside if wage pressure persists and leads firms to keep raising prices. There is the additional risk the Omicron variant or other COVID-19 ripple effects keep a squeeze on supply chains next year.

We maintain a positive outlook for the U.S. and global economies in 2022. Inflation has accelerated and persisted more than was expected earlier in the year, leading the Fed to get in a more defensive position, with similar moves by other global central banks. We expect inflation to decelerate in 2022 and the first rate hike by the Fed to come in the second half of the year but would not be surprised if it came earlier; it all depends on the path of inflation. Should inflation come in higher and more persistent than we expect, the Fed could hike as early as March. More importantly, we expect the rate hike path to be shallow with 0.25% increases per quarter once it gets started. Consequently, we see neither markets nor consumers ratcheting up their long-term inflation expectations. Should those start to drift uncomfortably higher we think the Fed would accelerate the rate hike path. We expect equities to outperform fixed income on strong global economic growth despite the expectation of interest rate hikes from global central banks.

[1] The calculation of the well-known “core” measure of inflation simply, and arbitrarily, removes food and energy prices because they are deemed volatile. However, as we’ve seen with hotel, airfare, and used car prices in 2021, many inflation components are volatile and can swing the index on a monthly basis. The “trimmed mean” measure is similar in concept to “core” in that it removes volatile components but instead of always removing two arbitrary items it excludes the most volatile components in any given month. See the Cleveland Fed’s methodology for more information.

Recession or No Recession? Depends on your Definition

Does Quantitative Tightening Pose a Risk to Markets?

Markets on a Knife-edge