December 15, 2016— The Federal Open Market Committee (FOMC) of the Federal Reserve unanimously voted to raise its target for the federal funds rate on December 14 from a range of 0.25%–0.5% to a range of 0.5%–0.75%. The decision was not a surprise to markets, as the market for fed funds futures had priced in a 100% chance of a hike, up from just a 50% chance in September.

More of a surprise was the upward revision to the so-called “dot plot” indicating the Fed’s expectation of three rate hikes in 2017, compared with two hikes the last time the dots were released in September. The dot plot is a part of the Summary of Economic Projections (SEP), the compendium of forecasts from the FOMC meeting’s 17 participants. Each participant supplies a forecast of gross domestic product, inflation, core inflation, and the federal funds rate. Media frequently focuses on the median of the 17 forecasts in the SEP, and it was this measure that moved from two to three hikes in 2017. 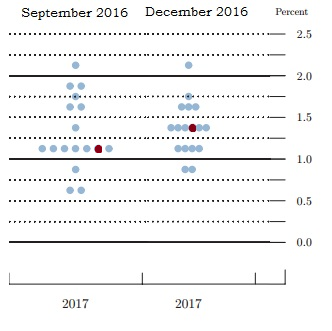 The dot plots from the September and December meetings are shown in the chart above, with the median dot shown in red. It illustrates the level of the federal funds rate expected by each participant at the end of 2017. Markets have clearly reacted to the upward move in the median dot, with Treasury yields moving higher, along with the exchange rate of the dollar. Another interesting change, though one that has attracted less attention, is the downward movement in some of the higher projections from September. Along with some of the lower projections moving up, there is now less dispersion in the projections, which reflects more agreement on the committee on the expected path for 2017.

As stated above, the median expectation is for three rate hikes over the course of 2017, as opposed to the expectation for two. We have not yet changed our expectation of the two rate hikes but we do believe there is more upside risk to that expectation whereas a few months ago there was greater downside risk.

One reason for upside risk is that market expectations have changed dramatically over the past six weeks. Before the election, the market was expecting a hike this week, but had priced in zero hikes in 2017. Post-election the market had moved swiftly into alignment with the Fed projections of two hikes in 2017. That is a dramatic move in a short time frame and also the first time the Fed and markets have held the same 12-month projection for several years. For several years the Fed has been projecting higher rates while the market expectation has been much lower. With today’s upward revision to three hikes in 2017, there is again a gap between the Fed and the market, but a smaller gap than has persisted in recent years.

Another reason for upside risk is the inflation outlook. We have maintained a higher-than-market forecast for inflation for more than a year. Similarly, we also have been projecting a greater number of rate hikes than the market over that timeframe. In our view, the realization of that higher inflation has become increasingly likely. In the early months of 2017, gasoline prices are expected to run as high as 30% in year-over-year terms, driving the year-over-year measures of inflation above 2% for the first time since 2014. The deflationary impacts, particularly on import prices, of strong dollar appreciation in 2014–2015 are now waning and we expect will cease being a major weight on inflation. We also expect the tight labor market to continue to exert upward pressure on wages which will in turn put upward pressure on inflation.

In the post-election period, markets are also pricing in higher inflation and higher long-term interest rates as a result of the growth policies expected from the incoming Trump administration. Details are not concrete, but we, and the market, have conviction that the policies will ultimately be stimulative to short-term economic growth. As proposed, they would likely add to federal deficits and debt. Both of those impacts tend to be inflationary.

Fed behind the curve?

If higher inflation figures materialize in early 2017, we expect increasing questions whether the Fed is “behind the curve” and may need to raise rates more quickly than markets currently anticipate. Nonetheless, we expect the Fed to remain cautious in its communications for several reasons:

The increase in interest rates was expected and is reflective of the progress toward the Fed’s goals of maximum employment and 2% inflation. The reaction in fixed income markets was for interest rates to move up across the curve, and is supportive of our underweight to core fixed income. We expect continued progress toward the Fed’s goal of 2% inflation, particularly in early 2017 when energy prices swing into very positive territory in year-over-year terms, driving overall inflation above 2%. But we believe core inflation will be moving upward more slowly. That will be supportive of more rate hikes, but the Fed is expected to proceed cautiously so as not to upend markets.