June 14, 2018—The much-awaited June meeting of the Federal Open Market Committee, or FOMC, (which votes on monetary policy actions for the Federal Reserve, or Fed), saw the federal funds target rate raised just as markets expected, by 25 basis points (bps), to 1.75%–2.00%. A few elements of the committee’s statement and press conference are worth noting. First, its assessment of recent data was quite positive, reflecting the recent rebound data after a softer patch in 1Q. In particular, readings on employment, retail sales, and PMIs have been quite robust.  Chairman Powell made little mention of concern about downside risks, and when questioned about trade tensions, emphasized that while the issue had been discussed, economic data to date have shown no signs of impact.

Regarding inflation, Chairman Powell stressed the symmetric nature of the FOMC’s inflation target. He signaled that the Fed would likely be willing to tolerate a near-term overshoot of the inflation target—given both how long inflation had remained below target during the recovery, plus the transitory nature of base effects and energy price impacts that are expected to nudge inflation above target in the coming months. This reinforces our expectation that the pace of rate hikes will remain gradual, as the Fed does not appear concerned about the recent pickup in inflation.

The development that received most market attention was the move-up of the median forecast for the federal funds rate for 2018 to an expectation of four total rate hikes as of the June projections (compared to three projected as of March). In our view however, this is not a major change, as it reflects the movement of just one participant’s forecast (which was all that was needed for the median forecast to move up). The “dot plot” of projections for the federal funds rate target (Figure 1) shows the FOMC is very close to evenly split between three and four rate hikes in total for 2018.

We look for solid U.S. GDP growth in 2018 (2.75%–3.0%), in line with the rosy near-term outlook of the Fed. Tax reform and fiscal spending measures implemented earlier this year, along with a strong labor market, should continue to boost consumer spending and business investment. The recent rebound in economic data since 1Q suggests that the U.S. economy remains resilient, despite some recent growth moderation for countries in other international developed and emerging markets. We do acknowledge though, that there are potential downside risks (market volatility, weaker global growth, political uncertainty, escalation of trade wars), which we think in turn could keep the chance of three rate hikes equally as likely as that of four in 2018.

Additional highlights from the FOMC statement and press conference

The FOMC statement maintained a hawkish tone in its more upbeat assessment of growth and consumer spending relative to the May statement, along with modest positive revisions to near-term forecasts for GDP growth, inflation, and the unemployment rate. The FOMC’s overall outlook has not changed substantially though, compared to the May statement and March projections. Longer-term projections remain unchanged.  In addition, the normalization of the balance sheet is expected to continue as originally announced. In our view, the movement of the median dot from three to four hikes for 2018 is less significant than it appears, as this reflects the upward revision of just one FOMC member’s forecast.

We expect the combination of a robust outlook for growth in the U.S., a moderate rise in inflation, and a gradual pace of Fed rate hikes to be supportive of our overweight to U.S. small-cap equities. We remain overweight international developed and emerging markets equities as well, but have recently reduced our positions, given signs of a deceleration in global growth from peak levels and our expectation of a modest appreciation of the U. S. dollar. We continue to expect global growth to remain solid despite the recent moderation, and maintain an overall overweight to equities relative to our benchmark, while remaining underweight fixed income. 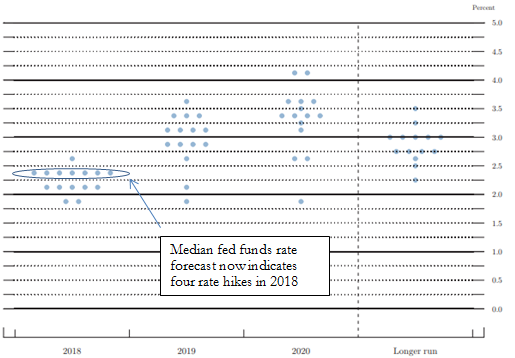