April 5, 2019 – Indian general elections are scheduled to begin on April 11, lasting through May 19. These elections have the potential to be largely consequential not just for India, but also for the performance of emerging markets equities at large. Over the previous five years, Indian equities have outperformed the MSCI Emerging Markets Index due in part to the current pro-business administration. As the fourth-largest market in the MSCI Emerging Markets Index (Figure 1), political control over India’s national parliament is of elevated importance. Client portfolios still have a slight overweight to emerging markets equities; thus, we will continue to monitor these events as they unfold and adjust our portfolios accordingly.

The Bharatiya Janata Party (BJP) gained an outright majority of seats in parliament in the 2014 general elections and appointed Narendra Modi as the Prime Minister of India.

The 2019 elections can be seen as a referendum on Prime Minister Modi and his policies. During his first term as prime minister—and while previously serving as Chief Minister of Gujarat State—Modi positioned himself as a pro-business politician, enacting policies that often conflicted with the party’s roots in populist Hindu nationalism. These policies have made Modi a divisive figure, and as a result, his former popularity has suffered since his landslide victory in 2014. Even so, he is still the favorite to retain power. He has embraced social media as a platform to reach his constituents, and remains India’s most followed figure.

Rahul Gandhi’s Congress Party is the BJP’s main opposition. Gandhi is part of a multi-generation political dynasty that led India to independence in 1947. The Congress Party was India’s dominant political force for many succeeding decades.

The Congress Party’s appeal has diminished over time and it was decisively defeated in 2014. Within the last year, however, it won several state-level elections, breathing new energy into the party as it prepares for nationwide elections.

Prime Minister Modi’s pro-business measures have helped to improve national economic integration, the overall efficiency of the economy, and foreign investor sentiment toward India. The effects for very small businesses, labor unions, and the rural poor have been mixed, with critics pointing toward upticks in unemployment as proof that Modi’s policies have not been very effective. Modi’s principal measures and criticisms have included:

One reason such reforms have been—and can be—effective is because the Indian economy is meaningfully diversified across sectors (Figure 2). This reflects the fact that listed Indian companies primarily serve India’s domestic market. 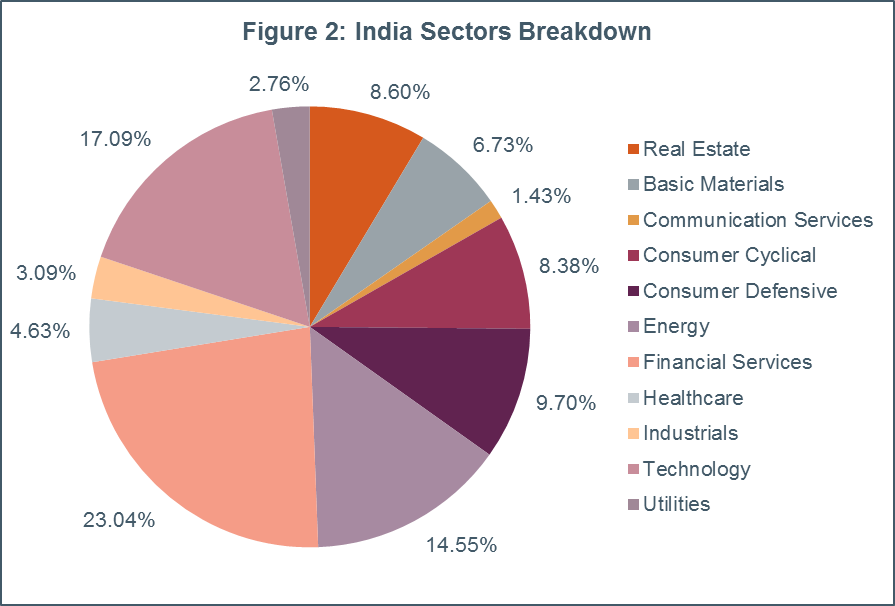 Undoubtedly, the pro-business measures described earlier are responsible for the fact that the MSCI India Index has outperformed other less diversified emerging markets since 2014, when Prime Minister Modi first took office. Figure 3 shows the relative outperformance of Indian equities against the MSCI Emerging Markets Index after extracting India’s contribution.

The illustration is hypothetical and is not intended to be indicative of the past or future performance of any specific investment option.

While Modi is often derided by the upper-class elite as an uneducated “tea seller,” his reputation among followers is that of a strong, decisive leader. In addition to his bold economic policies, he has advanced a foreign policy agenda that involves working with other countries, including the U.S. and Japan, to help contain Chinese influence. Recently, he engaged in brinksmanship with pro-China Pakistan over disputed Kashmir and successfully tested an anti-satellite weapon, a feat achieved by China a few years ago. Additionally, Modi is broadly popular in the West. Both Theresa May and the European Union have high hopes of establishing trade deals with India in the near future.

While Modi’s BJP seems poised to gain a plurality of seats in parliament, it is possible that recent gains by the Congress Party will deny it an outright majority. In that case, Modi will seek to form a National Democratic Alliance (NDA) with other regionally based parties. Given the likely second-place showing of the Congress Party, it would also need considerable support from other regional parties to form a “Grand Alliance” coalition. Current polling by the Times of India Mega Poll suggests that over 83% of the respondents who took the survey see a Modi-led NDA government as the most likely outcome of the general election.

We believe that an outright win by the BJP would, on balance, be the best outcome for the Indian equity market. The more likely outcome of a Modi-led NDA would necessitate Modi making policy concessions, which could slow down his pro-business agenda. On the other hand, we believe a Congress-led “Grand Alliance” would present considerable market uncertainty.

Given Modi’s consistent pro-business policies and the continued growth of the Indian economy, we have strong conviction that an outright Modi victory or a Modi-led NDA government in the coming elections would be positive for the Indian equity market. India currently represents the fourth-largest country exposure in the MSCI Emerging Markets Index in terms of market capitalization at around 8.5%, making this an important election not just for India, but also for emerging markets equities at large. Client portfolios continue to have a slight overweight to emerging markets equities. We will continue to monitor the Indian general election as events unfold and adjust our portfolios accordingly.

Anthony is a research associate responsible for third-party manager due diligence. He provides generalist support across the Manager Research Group...