September 18, 2017 — After five months of sitting in the doldrums, core consumer prices (excluding food and energy) rose by 0.2% month over month in August, the largest jump since January. Headline and core inflation rates are still holding below the Federal Reserve Bank’s (Fed’s) 2% inflation target, at 1.9% and 1.7% year over year, but the August  reading is the first in months to suggest that the underlying uptrend in inflation seen late last year could still be intact after March’s sharp setback.

Consumer price rises started off strong going into 2017, but soon hit a speed bump in March, with month-over-month core CPI turning negative, triggered in large part by the impact of major telecom companies moving to unlimited data plans, which resulted in a sharp drop in wireless telephone service prices. We were not overly concerned by this drop, as it was the outcome of a methodological change in the measurement of prices, rather than a sign of underlying weakness in consumer demand.

The following months however, saw a continuation of soft inflation readings, prompting concerns about the large inflation picture, and putting a damper on expectations of future Fed rate hikes. Shelter, one of the largest components of CPI, and medical care, had experienced price deceleration since the start of the year. There were, however, more volatile movements month to month across a number of sub-categories (hotels and motels, apparel, new and used motor vehicles, airline fares, and prescription drugs, among others) which combined to weigh on inflation as well. These mixed movements, over the course of a few months, have made it more difficult for markets, and even officials at the Fed, to discern whether the weakness in inflation has been caused by idiosyncratic rather than broader structural factors.

Since March, month-over-month readings in CPI have moved back into positive territory and shown slow sequential improvement. Prices in categories with some of the largest declines have begun to recover. The August reading saw the largest jump in the shelter index since October 2005, with hotel and motel component rebounding after a record drop in July. Medical care, a previous source of weakness, has stabilized over the past few months as well. Wireless telephone prices drops have moderated since March, steadying the education and communication category, which caused the original steep drop in CPI. While price trends in new and used motor vehicles, airline fares, and household furnishings remain subdued, categories like recreation and motor vehicle insurance are holding up. The underlying details of the August release are supportive of a still-healthy inflation trend, in our view, though it is still early and data on inflation in upcoming months will be very important to corroborate the trend.

The recent weakness in the U.S. dollar should also bolster inflation in the coming months. The dollar has declined by nearly 12% this year since its peak in December 2016. A weaker dollar tends to raise import prices, which in turn should be a boost to inflation. The chart below shows how the strength of the dollar between 2014 and 2016 dampened import prices for consumer goods (ex-autos). With the dollar’s decline so far this year, we have seen consumer goods import prices begin to creep up into positive territory once again, and believe this will also feed through to CPI. 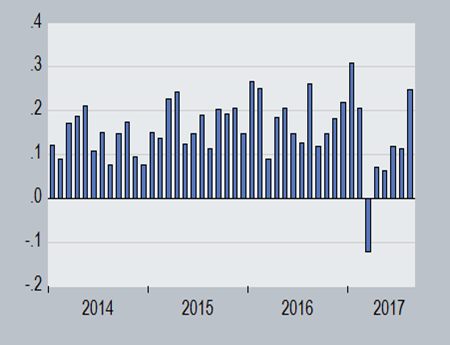 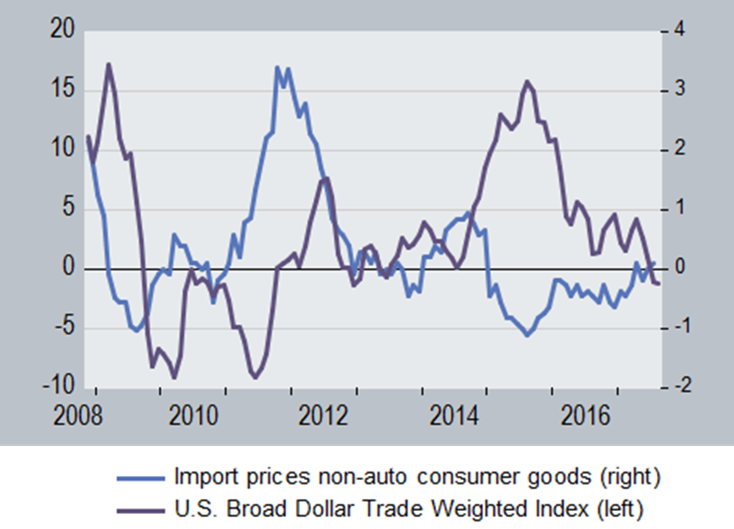 We expect the Fed to keep rates on hold at its meeting ending November 1, as it takes time to assess the impact of balance sheet reduction on markets. The Fed will receive 3 more data points on inflation by the time of the December 13 announcement (with the data for November CPI released that morning). At that point, the deadline for a budget deal—postponed on September 6 to December 8—will have already passed. Assuming the balance sheet normalization process goes forward smoothly, and contingent on stronger inflation readings over the next 3 months, we expect the Fed to hike rates at its December 13 meeting.

The August CPI data is a first sign that the underlying trend in inflation may be able to resume its uptrend. The impact of a weaker dollar should also begin to feed through to import prices, eventually pushing up consumer prices as well. We expect the Fed will keep rates on hold in September to announce further details on plans to reduce the balance sheet, and then hike again in December, contingent on stronger inflation readings in the interim.