October 24, 2017— Initial coin offerings (ICOs), a new form of fundraising for blockchain-based[1] startups, have been front and center in the cryptocurrency world in recent months as activity has risen exponentially (please see ABCs of bitcoin for more background on bitcoin and cryptocurrencies). ICOs have raised just over $2bn in funds in 2017 (as of end of 3Q) compared to just $104mn in all of 2016.[2] The pace of more traditional equity funding in the blockchain space in contrast, has grown more slowly, with $637mn in funding in 2017 (as of end of 3Q 2017) compared to $545mn in 2016.[3] This frenzy of activity in the fairly new, unregulated sector of cryptocurrency has attracted the interest of potential investors, as well as the scrutiny of government regulators. 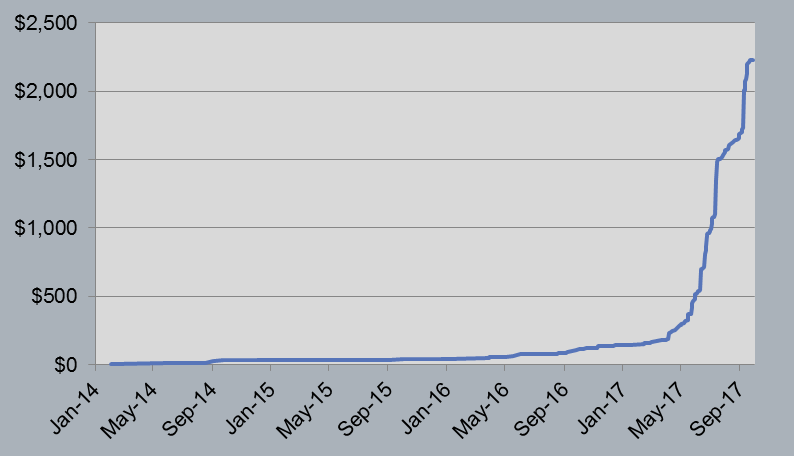 An ICO, sometimes known as a token sale, is a method for blockchain-based startups to raise capital online through the issuance of “tokens,” digital currencies used within a blockchain system. Since ICOs are unregulated, there are no standard procedures in place, but ICOs are usually announced on cryptocurrency forums online, and the group issuing the ICO usually provides a whitepaper describing the startup and any terms of the ICO (dates for the sale, maximum amount of tokens to be sold, minimum amount to be raised, rights offered by the tokens, etc.). An individual typically purchases these tokens using bitcoin, ether, or other cryptocurrencies. The privileges offered by these tokens vary widely depending on the terms specified by the specific ICO. Some potential rights that could be offered by tokens include the ability to use tokens for access to or payment for services of the project being invested in, the right to influence future development or participate in maintenance of the project, and the collection of fees or profits from the business being invested in, though there are many other potential rights that tokens can provide.[4] In addition, investors in ICOs typically expect to benefit from the appreciation of the value of their tokens as the projects gain traction.

A wide variety of projects have been funded via ICOs, with over 100 completed in 3Q 2017 alone.[5] One past example is Ethereum—the blockchain platform started by Vitalik Buterin, in which smart contracts (self-executing programmed agreements) are a key feature—which raised more than $18mn in 2014. Its token, ether, is now the second-largest cryptocurrency by market capitalization after bitcoin.[6] Another example is the web browser Brave, built by Mozilla co-founder Brendan Eich, which raised $35mn in less than 30 seconds in its sale of Basic Attention Tokens (BAT) in May 2017.[7] These tokens can be used on the Brave browser to allow users to pay to view ad-free web pages based on the amount of time spent on a page, and would also allow companies to pay users for viewing ads.[8]

ICOs vs. crowdfunding and IPOs

ICOs are thought to have the potential to change the landscape for raising capital, because they circumvent the traditional tight-knit, Silicon Valley-centric world of the venture capital funding system, which typically provides funding for startup businesses that are too early in their stage of development to access funds via banks or equity markets.[9] ICOs have some characteristics similar to crowdfunding, where funds are raised for early-stage ventures online, in small amounts from a large number of people. This characteristic tends to create a sense of community and gives the project being invested in a built-in user base with a stake in growing the platform. This also allows funding to be more decentralized, diminishing the role of intermediaries such as venture capitalists.[10]

Sometimes ICOs are also likened to initial public offerings—or IPOs, in which a company first sells shares of its stock to the public—in that individuals receive tradable tokens (similar to how investors in an IPO receive tradable shares of equity in a company). However, unlike IPOs, these tokens are not necessarily shares in the business, as described above (though ownership rights can be a potential right offered by a token, among other possible rights). ICOs are also typically used for businesses at a much earlier stage of development. Most importantly, unlike IPOs, token sales are not regulated, which means there are no investor protections via government agencies.[11]

While the absence of regulation of ICOs can allow for rapid innovation, it also leaves investors wide open to the risk of failed projects and fraud, given the lack of standards and scrutiny.  Globally, regulators have begun to react to ICOs as a result. In the U.S., the ICO of the Distributed Autonomous Organization (DAO), an Ethereum-based decentralized venture capital firm, was a high-profile case that brought regulator attention to the issue.[12] The DAO raised approximately $150mn in ether in its May 2016 ICO, but was hacked just a month later, with investors losing close to $60mn in funds. The funds were later returned to investors with a “hard fork” (change in the cryptocurrency code) in the ether system.[13] The Securities and Exchange Commission however, investigated the incident and decided in July 2017 that DAO’s token sale would have been classified as a security sale, making it subject to regulation by the SEC.[14] This ruling was specific to the DAO tokens, but did not provide clear guidance on token sales more broadly, as classification of a token sale as a security sale would “depend on the facts and circumstances, including the economic realities of the transaction.” Some in the cryptocurrrency media space have interpreted this to mean that a token sale might not be considered a security sale if the token has an actual utility (for example, tokens that are used to pay for services within a blockchain platform), rather than being used solely as an investment.[15] In an attempt to avoid being considered a security sale and avoid regulation, some ICOs may be marketed as “donations” or “crowdsales,”[16] though it is not clear that this would exempt these token sales from regulation.

Regulators in other countries, including Singapore, Russia, Canada, and the United Kingdom, have followed suit with warnings on ICOs.[17] The decision by Chinese regulators to ban ICOs (and additionally require the return of any funds raised via ICO) in China on September 4, 2017, one of the toughest actions taken, and had a substantial impact on cryptocurrency prices.[18] Bitcoin plunged in value by nearly 25% in the following 10 days (also impacted by China’s decision to close cryptocurrency exchanges), though the cryptocurrency has since stabilized and gone on to make new highs. There is some speculation that the ban in China will be in place only temporarily, while regulators take time to decide how to regulate ICOs and cryptocurrency markets.[19] South Korea’s Financial Services Commission went on to ban ICOs in late September as well.[20] Countries such as Switzerland, Japan, and Canada, meanwhile, have been more open to creating a welcoming regulatory environment.

Future regulation by government bodies has the potential to foster or impede progress being made in the ICO space. Difficulties in developing regulations center in part on coming to agreement on the definition of what tokens are, as they possess characteristics that span a number of different asset classes, including currencies, commodities, and securities. In addition, blockchain technology allows for projects funded by ICOs to be spread over many geographic locations, and groups issuing ICOs do not have to be technically organized as legal entities, which makes jurisdiction more complicated as well.[21] Unless global regulators decide to collaborate, activity in the ICO space can easily just shift to the most regulatory- friendly geographies.

While ICOs and cryptocurrencies, along with the blockchain technology behind them, have the potential to change the investment landscape, lack of regulation at the moment leaves investors with little protection against total loss of capital in the event of fraud or cybersecurity threats. With regulators still in the early stages of determining how to treat investments in these spaces, the impact of regulation on these markets remains unpredictable. We will continue to monitor cryptocurrency and ICO developments, but currently do not see ICOs as having a place in the investment portfolio of a long-term investor, given the risks.

[1] A blockchain is a decentralized, distributed ledger technology that provides a public and complete record of all transactions that take place within the system

[14]The ruling noted that “a security includes “an investment contract.” … An investment contract is an investment of money in a common enterprise with a reasonable expectation of profits to be derived from the entrepreneurial or managerial efforts of others.” https://www.sec.gov/litigation/investreport/34-81207.pdf