November 10, 2017— Saudi Arabia is planning an IPO for 5% of ARAMCO, the state-owned oil company, for 2018 or 2019. With an estimated value ranging from $50-$100 billion, the IPO would be the largest-ever IPO. The proceeds are slated to fund a capital increase in Saudi Arabia’s sovereign wealth fund, the Public Investment Fund. New York and London are competing to be the listing venue – President Trump even promoted New York by tweet. Moreover, with implied market capitalization of $1-$2 trillion, ARAMCO would instantly become one of the world’s largest listed companies by market cap, bigger even than Apple or ExxonMobil. This would have global investment implications, since ARAMCO’s market cap would be bigger than that of other major global oil companies, not just Exxon Mobile, but also Chevron, Royal Dutch Shell, BP, Total, and Petrochina (see chart). 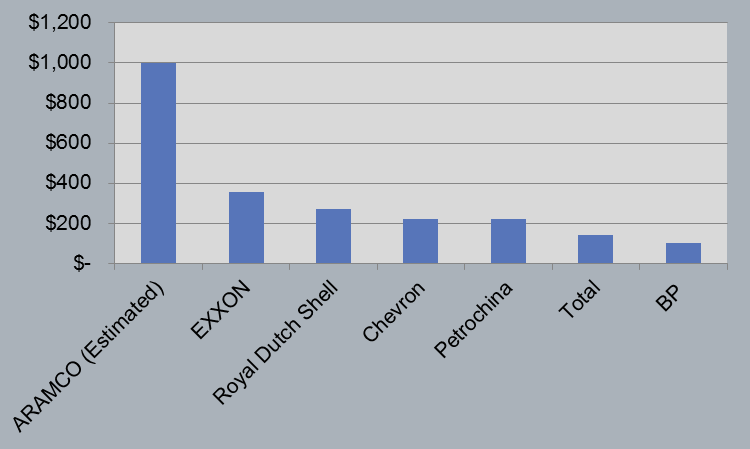 In addition, quite apart from the ARAMCO IPO, index provider MSCI will be considering whether to move Saudi Arabia from “frontier” to “emerging market” status in its 2018 market classification review. An inclusion determination would bring Saudi stocks into many emerging market ETFs and mutual funds. Saudi authorities have been taking measures in recent years to bring the local stock exchange up to international standards, and expect a fast-tracked MSCI determination. Currently, relatively few Saudi stocks are traded, and Saudi Arabia would likely be ranked 9th in the emerging markets (EM) index by market cap. However, with EM funds seeking out Saudi stocks, we can expect many more listings, so the weight will rise. Further, if the ARAMCO IPO  goes forward, the inclusion of ARAMCO would dramatically increase the weight of both Saudi Arabia  and energy stocks in the EM index, reducing the current preponderance of Asian e-commerce and technology stocks in that index.

Political turmoil puts both at risk

However, current political turmoil in Saudi Arabia places both the ARAMCO IPO and the MSCI EM determination at risk. Muhammad bin Salman, the 32 year-old son of 81 year-old King Salman, has been pursuing an aggressive consolidation of power since his father ascended to the throne in April 2015, and especially since the King elevated him from Deputy Crown Prince to Crown Prince in June 2017. There are even rumors that King Salman might step down within the next few days or weeks.

The latest development occurred last weekend. The Crown Prince established an anti-corruption committee, which promptly detained many rival princes, billionaire businessmen, and government ministers on corruption and money laundering charges and froze their personal assets. Detaining ultra-wealthy Saudis on grounds of corruption and money laundering is a move that is a bit reminiscent of the movie Casablanca. As Captain Renault is shutting down Rick’s Café he’s saying, “I’m shocked, shocked to find that gambling is going on in there,” just as a croupier hands the captain a pile of money, saying “Your winnings, sir.”

The Crown Prince replaced one of the detainees, Prince Mutaib, the head of the National Guard, with himself. As a result, the Crown Prince now controls all three of the nation’s security services.  Amidst the purge, one prince has died, in a suspiciously timed helicopter accident. These actions are reminiscent of Xi Jin Ping’s actions upon his ascension to power, when he, too, detained rivals based on anti-corruption charges.

We believe that the King and Crown Prince are establishing a father-to-son, direct hereditary monarchy. The last time a son succeeded his father as king in Saudi Arabia was in 1953. Traditionally, Saudi Arabia has been governed through consensus among the senior princes of the “House of Saud.” Also, traditionally, an “allegiance council” of the senior princes confirms selection of a new king. To date, the monarchy has rotated among the increasingly elderly sons of the first king, Saud, who founded the Kingdom in 1932. King Salman appears to be taking advantage of the necessity of generational change to position his own son as future king, thereby, in effect, establishing a new “House of Salman.”

No doubt the would-be kings from other branches of the House of Saud, especially those in their fifties and sixties, are angered by these moves by the King and Crown Prince. Clearly, actions taken against rival princes reflect an attempt to force compliance by the Allegiance Council in selecting the new king.

In addition, since taking reins of the military, the Crown Prince has been taking aggressive action against other perceived threats. He has stepped up suppression of the large Shi’a minority and has confronted Iran’s Shi’a proxies in nearby countries, who may be fomenting Shi’a insurrection within the Kingdom. In particular, he is engaged in military confrontation against Yemen’s Houthis, a Shi’a rebellion that now controls much of that country. He has also led a boycott of Qatar, whom the Crown Prince accuses of interference in Saudi affairs and of financing terrorism. These actions seem to reflect a degree of paranoia about the true state of the Kingdom’s political stability, mixed with a desire to project Saudi Arabia as a regional power, equal to Iran.

Additionally, the King and Crown Prince are trying to reduce the power of Saudi Arabia’s own ultra-conservative Wahhabi Islamic clergy. They have reduced the power of the religious police to enforce dress codes and have decreed that women shall have the right to drive cars. Clearly, they undertook these moves to soften discontent, as well as to identify and detain those clergy who have openly dissented against these decrees.

Of course, there are multiple ways to interpret these developments. A more optimistic interpretation is that the Crown Prince represents an autocratic modernizing force, much like Ataturk, who suppressed all Turkish opposition and fought off foreign forces in order to transform the Ottoman Empire into the Republic of Turkey. The Crown Prince’s “Vision 2030” plan speaks to such economic and social modernization, but does not involve evolution into a republic. A pessimistic interpretation is that all of these moves are entirely defensive—that there is a fear that Saudi Arabia will be torn apart by corruption, Saud family conflicts, clerical interventions, Shi’a rebellion, and external interference. A worst-case scenario is that Saudi Arabia would become a failed state, broken up into Sunni and Shi’a provinces, much like Iraq had been.

As much as the Crown Prince (and future King) would seek the ARAMCO IPO and MSCI EM determination to proceed, we believe that the current political turmoil and the uncertainty it spawns will force delays in the Vision 2030 agenda.

We are currently overweight emerging market equities. As we believe that MSCI EM determination will be delayed, the current unrest in Saudi Arabia will have no impact on ETFs and mutual funds which benchmark to the MSCI Emerging Markets index. Consequently, Saudi developments provide no reason to go equal weight or underweight. Moreover, the likely delay in the ARAMCO IPO will forestall the impacts that this would have on global energy-sector investing. We will keep monitoring the situation closely, and watch for further signs of political destabilization.