March 8, 2021— Special purpose acquisition companies (SPACs) have been around for decades but gained wide recognition in 2020 as an increasingly popular, alternative method of going public following a surge in initial public offering (IPO) and merger activity. In 2020, 248 new SPACs came to market, encompassing 53% of all IPOs for the year, and raised a cumulative $83 billion—more than five times 2019’s volume (Figure 1). This year started off with a bang as well, with more SPAC IPOs in January and February than all of 2019 combined. In this blog post, we provide a high-level overview of the SPAC structure and the key reasons behind its sudden resurgence. While the explosion of activity might be tough to sustain, we believe SPACs will increasingly be viewed as a viable route to public markets due to the distinct advantages they can provide versus the traditional IPO process, as well as growing acceptance from sponsors, targets and investors alike. 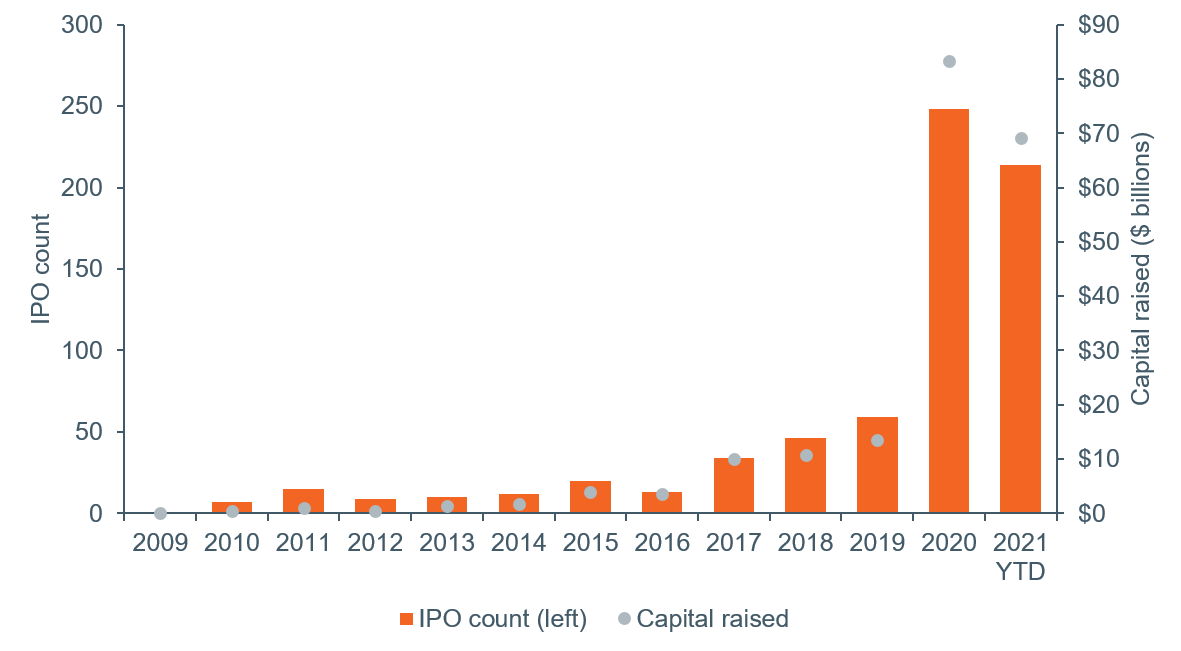 What is a SPAC?

A SPAC is a “blank check” firm that is formed to raise capital with the sole objective of finding a private business to take public. In the traditional IPO process, a firm makes its public debut issuing its own shares to investors. SPACs offer an alternative route to public markets, in which a private firm joins forces with an already public SPAC, and ultimately becomes the controlling party with its own ticker symbol. Outside of the target firm, key stakeholders include:

Why might a company choose to go public via a SPAC instead of an IPO?

The SPAC process and structure differ in a few ways that can potentially offer unique advantages depending on the company and market environment:

Why did SPAC transactions surge in 2020?

While the media has increasingly focused on whether the market is overly saturated with SPACs searching for targets, we believe that the environment remains conducive for continuing activity given the large number of private companies that is constantly being refreshed. Growing competition among outstanding SPACs has had a positive impact in helping to drive evolution of the structure in a way that better aligns the interests of all stakeholders. A prime example is Bill Ackman’s Pershing Square Tontine Holdings, which notably does not include founder shares—a key source of dilution that allocates asymmetric windfall to SPAC management teams. Given the abundance of SPACs searching for targets and the continuous flow of new IPOs, we would expect to see the structure continue to transform in ways that accrue greater benefit for the target and shareholders. While a market dislocation or underperformance of SPAC acquisitions could subdue the enthusiasm of targets or investors from current levels, it seems likely that SPACs’ positioning as a viable alternative to IPOs is here to stay. We will continue to closely monitor SPACs for opportunities and insights where we believe it could add value to client portfolios.

Investments: Are NOT FDIC Insured | Have NO Bank Guarantee | May Lose Value

Reference to the company names mentioned in this blog is merely for explaining the market view and should not be construed as investment advice or investment recommendations of those companies. Third party trademarks and brands are the property of their respective owners. Indexes are not available for direct investment.

Behavioral Investing—Managing the Emotions Behind our Decisions

The Metaverse:
A reality or cyber-fantasy?

Recession or No Recession? Depends on your Definition