September 28, 2018— As was fully expected and fully priced in, the Federal Reserve hiked interest rates again on September 26, and signaled that it expects to keep doing so over the next couple of years. The federal funds rate range increase of 25 basis points, or bps (0.25%), brought its target up to 2.00%–2.25%. It was the eighth such hike, for a cumulative increase of 200bps from the zero level that had persisted for many years during the early part of the recovery. We expect the Fed to hike once more this year in December, barring any significant economic or market shocks between now and then. However, there is downside risk to the current projections of three more hikes in 2019. Additionally, we have three main takeaways from the Fed’s updated projections and Chair Powell’s press conference.

The details of the hike and our expectations

This week’s hike was fully expected and the signal about another hike in December was not a surprise, so the action had very little impact on longer-term interest rates farther out the curve. The 3-month Treasury bill, which essentially moves in lockstep with Fed policy as well as the expectations three months ahead, hardly moved at all after the announcement. The 2-year yield has moved down just 2bps, and the closely watched 10-year Treasury, which is affected by Fed policy but also by longer-term expectations of growth and inflation, actually moved down about 3bps on Wednesday, when the hike was announced, reflecting that at least some investors were expecting the Fed to be a bit more hawkish.

In terms of future hikes, the Fed mostly reinforced its existing guidance. In the last round of projections from June 2018, the FOMC’s median expectation was for two more rate hikes this year, but only by a small margin. With this week’s update, there are now 12 out of 16 members of the committee who think a fourth rate hike this year, in December, is the appropriate path for policy. Looking into 2019, the median expectation was unchanged, expecting three more rate hikes next year, which would bring the federal funds rate to a target range of 3.00%–3.25%. (See the second orange dot in Figure 1.)

While we don’t quibble with that as a baseline expectation, we think there is a greater chance of them moving slower than that baseline than there is of them picking up the pace. Items that may push the Fed to hike faster than projected next year include: a further tightening of the labor market and meaningful acceleration in wage growth; an acceleration of current inflation readings; and, a significant increase in expected future inflation. While any of those things are possible, it is more likely that some of the downside risks will materialize. They include: a moderation of current inflation data and economic growth; a continued flattening of the yield curve that approaches the point of inversion (which we think would make the Fed reassess); and, significant (domestic or international) equity market weakness, that would rekindle worries about global economic growth. To be clear, we are not calling for any of those items to transpire, but place a higher likelihood on the downside risks than the upside ones.

Three observations from the press conference 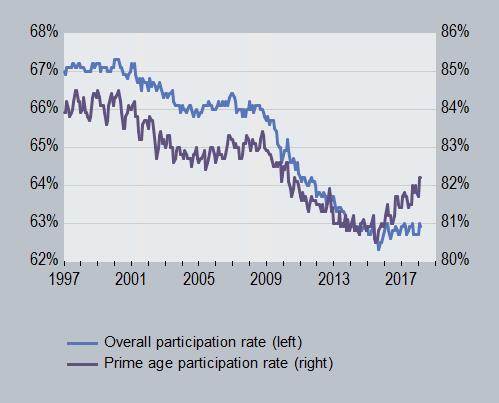 The Fed has hiked rates for the eighth time this cycle, bringing the target to 2.00%–2.25%, a marked departure from the zero level that had endured for so long after the crisis. Barring a surprise in financial markets or sharply weaker economic data, it is highly likely to hike again in December. The central bank’s projections of three more hikes in 2019 are a good baseline, and there is the possibility of a rate pace that is either faster or slower. In our view, there is a greater likelihood of the latter.

Any investment products discussed in this commentary are not insured by the FDIC or any other governmental agency, are not deposits of or other obligations of or guaranteed by M&T Bank, Wilmington Trust, or any other bank or entity, and are subject to risks, including a possible loss of the principal amount invested. Some investment products may be available only to certain “qualified investors”—that is, investors who meet certain income and/or investable assets thresholds. Past performance cannot guarantee of future results. Investing involves risk and you may incur a profit or a loss.