January 11, 2017–Recent volatility in the value of the U.S. dollar index (DXY) and the Chinese currency (CNY) would indicate rising concerns about the likelihood of trade disputes between the incoming Trump administration and China. President-elect Trump has criticized China for “eating our lunch.” He has threatened to impose large tariffs on Chinese imports, suggesting that his goal is to negotiate a good deal with China that would be fair for American companies and workers. Should we expect beneficial negotiations or a contentious trade war?

Trump often refers to President Reagan’s trade negotiations with Japan as his model for dealing with China. During the 1980s, Japan was accused of using unfair trade practices and industrial policies in order to achieve its dominance in key industries. Now, 30 years later, strikingly similar accusations are being made about China.

In engaging with Japan, Reagan used the threat of tailored tariffs under Sections 201, 301, and 421 of the Trade Act of 1974 to negotiate industry-specific agreements with The Ministry of International Trade and Industry (MITI). A provision known as Super 301 enabled Reagan to designate Japan a negotiating and enforcement priority. Table 1 summarizes Reagan’s record on Japanese trade:

Japan did not retaliate against Reagan’s Section 201 and 301 actions and threats because each case involved prior negotiations and was tailored, well-justified, and legal under World Trade Organization (WTO) rules.

In negotiating trade deals with China, Trump has available the same menu of tools that Reagan employed, and then some, as shown in Table 2.

As long as Trump sticks to the Reagan script of negotiations-plus-enforcement, we believe China is not likely to retaliate.

Risk of a trade war

There is, of course, some risk that Trump might impulsively depart from the Reagan script and seek to impose high, indiscriminate tariffs on all Chinese imports. Such an ultra-protectionist action would likely invite Chinese retaliation. Notably, China could cancel Boeing contracts or block laptop and mobile phone exports to the United States.

A counterproductive trade war with China could prove disastrous for the global economy as well as adversely impact U.S. foreign policy, particularly in Asia. Consequently, we believe that Trump’s senior cabinet officials and advisors, some of whom have decades of experience in global business, would counsel Trump to stick to the Reagan script.

Even if Trump were inclined to ignore his team’s advice, he would still likely need congressional authorization to apply high tariffs broadly to all Chinese imports. The Trade Act of 1974 does not provide authority for Trump to target a single country with across-the-board tariffs. Nor do WTO rules. Trump might try to use wartime or national emergency powers, but his own Attorney General, the Congress, or the courts might consider such action an abuse of power.

We do not believe that Congress would authorize targeting China with high, indiscriminate tariffs. Boeing, Apple, and many other American companies selling to China would lobby Congress to vote against such action. Furthermore, business super-PACs would likely target for defeat in the 2018 elections any representatives voting for such tariffs.

A comprehensive investment deal with China

A trade war could also block any opportunity Trump might have to conclude a more comprehensive investment deal with China to promote American business. We expect that Trump would want to restart President Obama’s lapsed negotiations with China regarding a Bilateral Investment Treaty (BIT). We expect that a BIT negotiated by Trump would provide U.S. companies with benefits such as those described in Table 3. 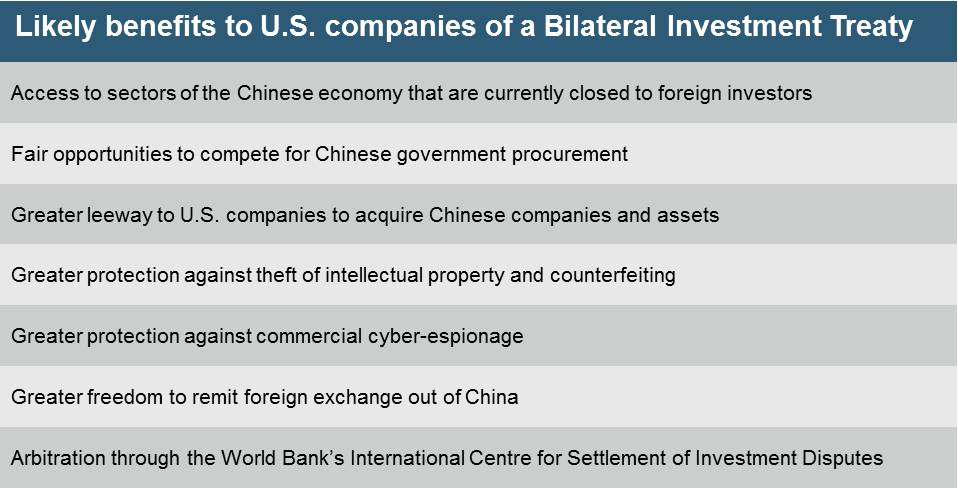 Through a BIT, Chinese firms would also gain greater access to investment opportunities in the U.S. market. We believe that Trump would welcome opportunities for American firms to partner with Chinese firms in his high-priority policy areas, such as manufacturing revitalization, expansion of energy production, and infrastructure development.

Our core narrative suggests that the Trump administration will likely be able to boost short-term U.S. growth through fiscal policy measures in 2017. Successful trade and investment negotiations with China could reinforce and extend this narrative. A trade war would severely undermine the narrative. However, a trade war is not our base case scenario.