May 2, 2018—As of May 1, the U.S. economy has entered the second-longest economic expansion in its history (tied with the expansion of 1961–1969). Though “expansions don’t die of old age,” this new milestone will likely keep markets on edge watching for signs of a peak in the economic cycle. One of the key indicators frequently monitored for signs of a turn in the economy is accelerating wage growth. The concern is that rising wages tend to prompt worries about upward pressure on inflation, and potential additional rate hikes from the Fed, which in turn curtail the expansion. The most recent example of this type of market reaction occurred just months ago in February, when jitters about higher-than-expected average hourly earnings (one measure of wage growth) jolted markets out of their low volatility complacency. Since then, market anxiety on this front has receded somewhat, as the January average hourly reading was revised down and subsequent reports showed more subdued (though still solid) increases. Average hourly earnings, however, is just one of a number of measures of wage growth. The employment cost index for the first quarter of 2018, released last week, posted the largest quarterly gain since the end of the recession. Later this week, markets will see two additional indications on wage trends (nonfarm hourly compensation for the first quarter of 2018, and average hourly earnings for April), both of which will be worth monitoring for signs of a pickup.

What are wage growth measures currently telling us?

There are four key aggregate measures of wage growth: average hourly earnings, the employment cost index, nonfarm hourly compensation, and the Atlanta Fed Wage growth tracker. All of these measures suggest that wage pressures have been picking up, but at a very modest pace over the course of the current expansion. All four are now finally approaching (or just above) growth of 3.0% year over year (y/y). Average hourly earnings, one of the most closely watched indicators, are currently up 2.7% y/y, still far from the approximate 4.0%-4.5% y/y pace that has been historically associated with pressures on corporate profit margins, but above the 1.5% y/y pace seen at post-recession lows. The employment cost index total compensation measure, which is a broader but less timely measure, is also up 2.7% y/y, compared to its post-recession low of 1.4%, but still below its 2002–2007 average of 3.5%.

Meanwhile, the uptick in wages has moved in line with signs of decreasing labor market slack. Wage growth has moved up as the gap between the broader U-6 unemployment rate (which includes workers who are part time for economic reasons and those who are marginally attached to the workforce) and the official unemployment rate has narrowed (Figure 1). As the labor market continues to tighten, we would expect continued upward pressure on wages. Stronger wage growth going forward, coupled with a strong labor market, should also be supportive of consumer spending. 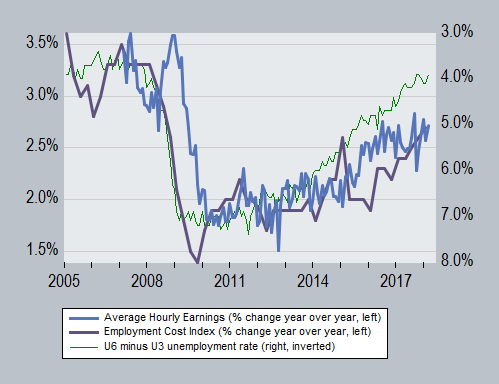 Why is wage growth important for markets?

First, wage growth is a measure of labor costs for firms, which, if it is rising, suggests that employers could potentially pass these additional costs to customers, contributing to higher economy-wide inflation (although this is not necessarily the case, if it is accompanied by rising productivity). If firms do not pass on higher wage costs on to consumers, eventually rising wages will begin to hurt firms’ profit margins. Second, the pace of wage growth can be an indication of remaining slack in labor markets, which in turn has implications for Fed policy, given its goal of fostering both price stability and maximum employment. Finally, wage growth can provide signals for trends in consumer spending in the economy (which accounts for approximately 70% of GDP).

In short, the current pace of wage growth does not yet suggest concerns about triggering higher overall inflation, nor does it prompt the Fed to hike at a more rapid pace than expected. We expect two more rate hikes from the Fed by the end of 2018, though we acknowledge the risk of an additional hike. We do expect that as labor market slack continues to decline, wage pressures will be nudged higher, so we will continue to monitor these trends. Stronger wages, along with a tighter labor market, should bolster the U.S. consumer, along with tax reform and fiscal spending, which should be supportive of the U.S. economic outlook for 2018. We are overweight risk assets, with an overweight to non-U.S. equities and a neutral position in U.S. equities, as we believe the U.S. is further along in the business cycle relative to international economies. We remain underweight fixed income.

Appendix: What are the different measures of wage growth and which is the best?

As mentioned earlier, there are four important measures of wage growth that tend to receive market attention: average hourly earnings (AHE), the employment cost index (ECI), nonfarm hourly compensation (NHC), and the Atlanta Fed Wage Growth Tracker (AFWGT). Each of these indicators measure slightly different aspects of wage growth and so, as a result, have various strengths and weaknesses (see Figure 2). Given the differences in what each indicator measures, none of them are directly comparable, so monitoring all of them in combination can provide a better overall picture of wage trends than any one indicator on its own (Figure 3).

Timeliness, breadth of compensation coverage, and adjustment for shifting dynamics in employment composition are key characteristics that differentiate each of these wage measures. Some measures (AHE and AFWGT) are more timely since they are released monthly, compared to quarterly releases for the ECI and NHC. Some measures like AHE are narrower in that they only measure wages and salaries, but exclude certain non-wage benefits (such as healthcare coverage or bonuses), while the ECI and NHC are more comprehensive in total compensation coverage. Finally, the ECI and AFWGT measures both adjust for changes in the mix of employment in the labor market, whereas AHE and NHC do not. For example, AHE could show a trend of rising wages if more people move into higher-paid jobs over time, even if wages in the lower-paid jobs remain unchanged because of the way it is constructed.

The AFWGT looks at the median, rather than the average, of 12-month wage growth, and looks only at those workers who have been continuously employed for 12 months. This helps to account for structural factors (as described in a study done by the Federal Reserve Bank of San Francisco) such as the entry and exit of workers from the labor force, which tend to drag down average wages during expansions, when new workers, who tend to have lower wages, are entering the labor force at a faster pace (while the opposite impact tends to boost average wage measures during recessions). In addition, this measure helps account for demographic factors, such as ones we are experiencing now, where larger numbers of Baby Boomers are retiring (dropping out of the workforce at higher wage levels) and are being replaced by new entrants to the labor market (who are less experienced and entering at lower wage rates). 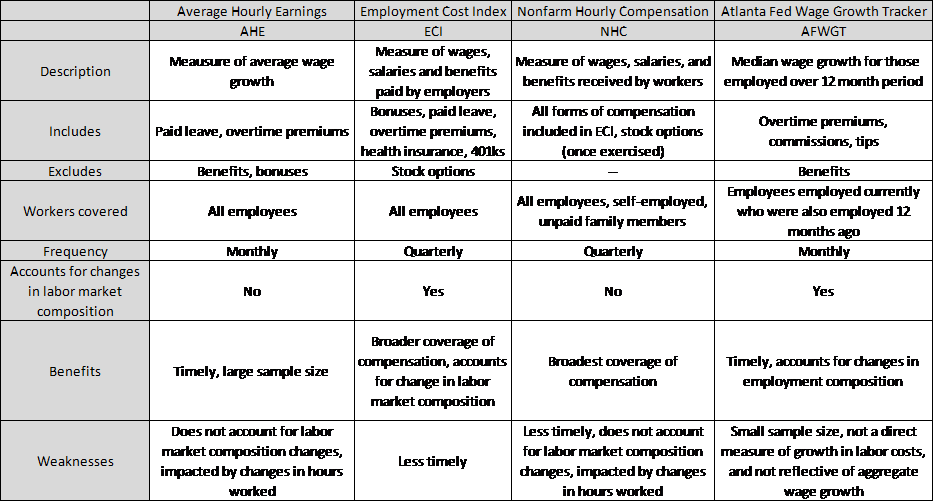 Figure 3: Wage pickup has been gradual during the current expansion 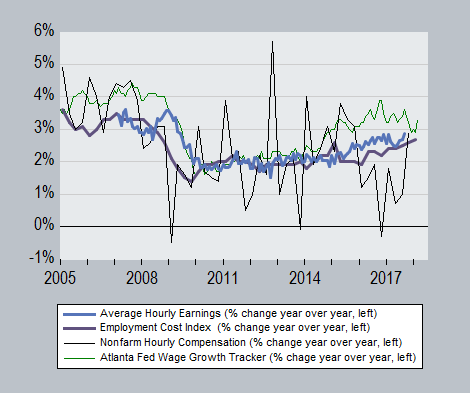