November 2, 2017— Technological advances have fundamentally changed the way our society exchanges goods and services and have paved the way for the rise of the “gig economy.” This type of economy is mainly made up of flexible jobs that are usually short term in nature and are composed mostly of independent contractors and freelancers instead of full-time employees—think about the Ubers, Lyfts, and Airbnbs of the world. The effects of gig economies on wages and inflation can already be seen today, but these effects have the potential to become much more pronounced in the future.

The number of people currently employed by the gig economy is extremely difficult to determine. Government agencies often have a difficult time collecting data from these cohorts and there are very few studies and surveys that agree on the number of gig workers currently employed under the gig economy. The McKinsey Global Institute (MGI) estimated the gig economy workforce to be between 54 and 69 million people in the United States, or about 27% of the working-age population.

Uber alone had grown to over 600,000 drivers in the United States by the end of 2016, which is nearly three times the number of taxi drivers and chauffeurs in the United States in 2014. Lyft had about 700,000 drivers by the end of 2016, which was double the number from the prior year. Airbnb has reached over 4 million listings worldwide, which are more listings than the top five hotel brands combined, with listings in the U.S. surpassing the 660,000 mark.

Gig economies can also make it easier to find a job. Sometimes finding a job is as easy as downloading an app and passing a quick inspection. This ease of entry into the workforce could cause the unemployment rate to decrease. Normally, we would expect that the current low unemployment rate of 4.2% would exert upward pressure on wages as employers compete for labor. Figure 1 demonstrates that this has not been the case. While wages have increased slightly, it has been marginal. 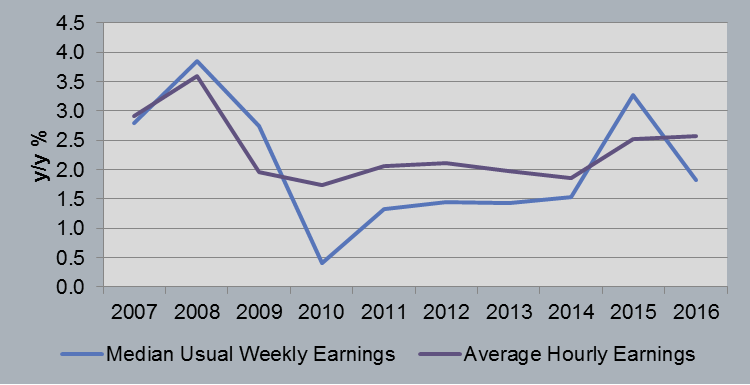 Median Usual Weekly Earnings (MUWE) are calculated using the Current Population Survey conducted by the U.S. Census and the Bureau of Labor Statistics (BLS). It can include workers who self-identify as meeting the gig worker criteria. Average Hourly Earnings (AHE) are calculated through the Establishment Survey conducted by the BLS. This survey only includes workers that are officially on payrolls for establishments and therefore excludes gig workers. The fact that the MUWE earnings line is usually below the AHE line could have something to do with the rise of technology platforms that facilitate gig work. For context, Airbnb was founded in 2008, Uber was founded in 2009, and Lyft was founded in 2012.

One reason why wages have not increased more rapidly could be because workers for most gig economy companies are considered independent contractors, not employees. They do not qualify for basic protections like overtime pay and minimum wages. Low unemployment no longer leads to rapid wage increases. We can see this as being the case with the MUWE line trailing the AHE line fairly consistently since 2010.

The fact that wages have not been steadily increasing suggests that inflation is not coming from wage increases. Since the gig economy mostly deals with services, the natural progression is to analyze whether inflation is being subdued by cheaper services.

For example, Airbnb has made it more affordable to take vacations. Figure 2 shows the average hotel and Airbnb price rates for some popular cities in the United States. Airbnb offers less favorable prices to customers in the South, but beats prices in the Northeast and the Pacific Northwest.

Historically, the services side of the economy has been the main contributor to inflation with consumers spending only about one-third on goods and the remaining consumption being spent on services. This weight of services and goods in the Consumer Price Index (CPI) has widened over time as can be seen in Figure 3. 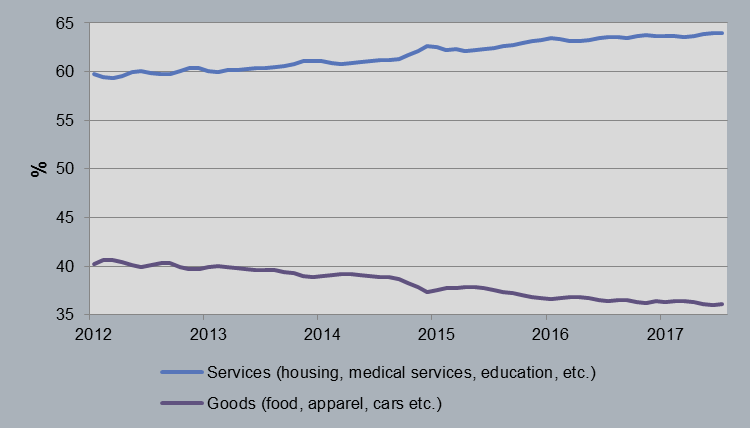 Additionally, the recent slowdown in CPI inflation can be attributed mainly to a decline in the services component of the index as can be seen in the Figure 4. This trend could potentially continue as gig workers continue to make up a larger portion of the labor force. 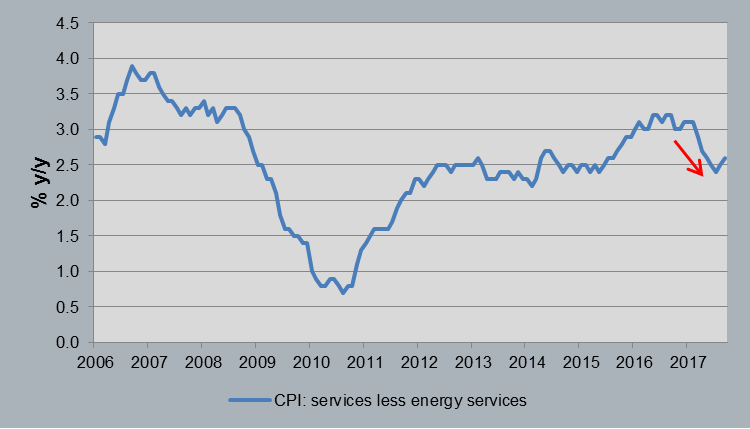 Both inflation and wage growth have been lower in the current economic recovery compared to previous expansions. There is not a consensus for the reason, but it is possible that the gig economy and its workers are playing a part. It is quite difficult to conclude the type of role that gig economies have in determining inflation given the limited data available for this cohort. The Bureau of Labor Statistics published some figures on contingent and alternative work arrangements back in 2005 with more recent figures set to be published in early 2018. One thing that is certain is that gig economies are disrupting the way we consume goods and services and making the supply of labor more efficient. If this group of people continues to increase in size through the facilitation of technology platforms, the impact has the potential to become much larger in the future. The effects of gig economies on wages and inflation are something that we will continue to monitor very closely.

Anthony is a research associate responsible for third-party manager due diligence. He provides generalist support across the Manager Research Group...