August 18, 2019 – Last week was another incredibly volatile period for financial markets, with trade tensions, mixed economic data, and an inverted yield curve contributing to wild swings in stock and bond markets. While the recession risks have risen, it is still not our base case that the U.S. will enter recession or experience negative government interest rates prior to next year’s election. We are urging clients to remain patient and not overreact to the volatility (to hear more about how volatility is a normal part of investing, listen to our recent podcast, “Stock Market Swings”).

An inverted yield curve is one of those financial market indicators that strikes fear into the hearts of investors, and for good reason. The Treasury yield curve has inverted—where the yield on short-maturity Treasury bonds exceeds that of long-dated Treasuries—as it has prior to each of the last five U.S. recessions. The portion of the curve between the 10-year and 3-month yields inverted for the first time in this expansion back in May, but the 10-year minus 2-year slope is regarded by many as a more reliable recessionary indicator, and that remained upwardly sloping—until August 14. Cue the market hysteria.

While investors seemed to hit the panic button immediately after the inversion, we wanted to provide a bit of context to put the market developments in perspective. 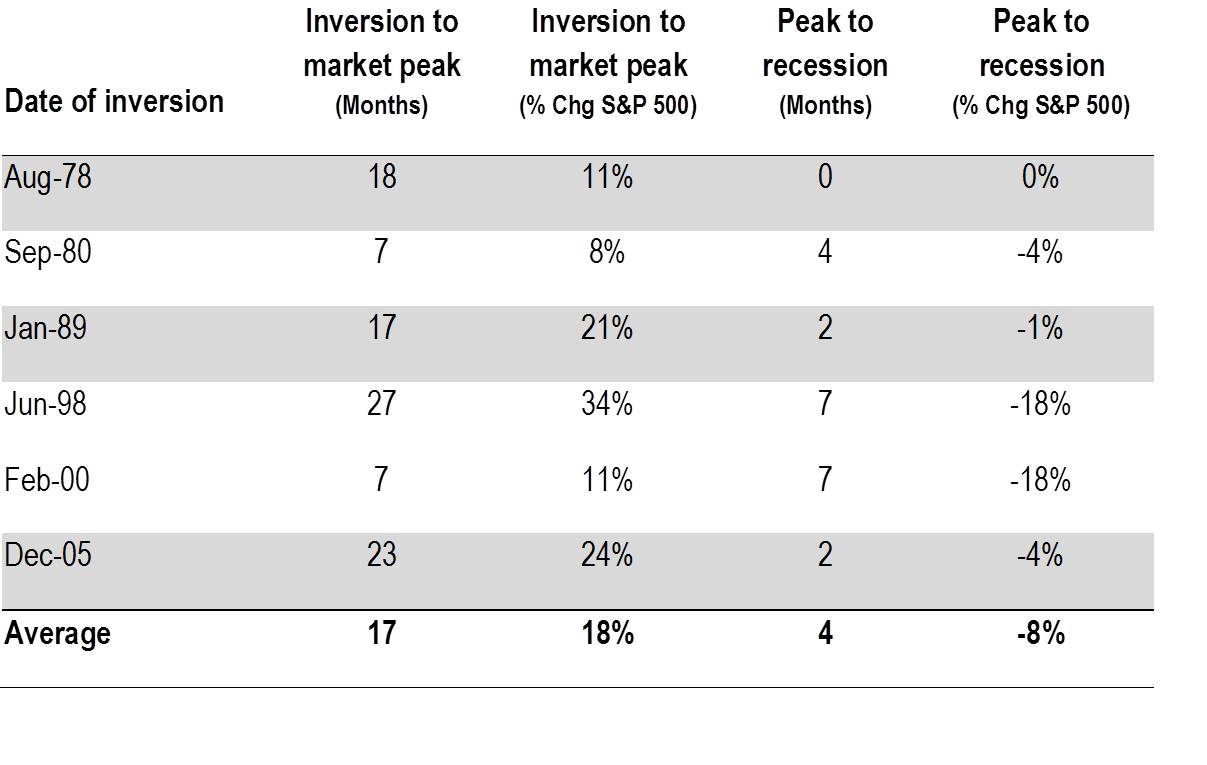 All of this is to say that we recognize the signal the inverted yield curve has given us, and we are wary of joining the “this-time-is-different” crowd. However, when we look at the collective picture, we find ourselves in a similar spot to where we were a few weeks ago: late cycle with mounting risks related to trade but no expectation of an imminent recession.

Fundamental analysis aside, we also believe that the Trump administration would be motivated to provide some tariff relief if the overall economy decelerates sharply into the 2020 presidential election. We reduced our equity exposure from an overweight to neutral and increased our exposure to high-quality fixed income back in May in anticipation of the rising trade risks and higher volatility playing out in the market today. We have also taken a more defensive tact within equity portfolios, seeking lower- volatility stocks and higher-quality balance sheets, i.e., those we believe offer high return on equity, high free cash flow, and low leverage (for more on this, see the recent Op Ed on CNBC.com). These moves have all worked quite well in our portfolios during the recent volatility bout.

As the economic and policy risks shift, we will continue to adjust portfolios to protect clients and take advantage of investment opportunities when they arise. But for now, steady as she goes.