May 22, 2019 – While 2018 was a notable year for growth in the economy, with GDP expanding at a solid pace of 2.9%, it was also notable for the lack of growth coming from the housing sector. After making modest positive contributions to annual GDP growth in each year of the recovery since 2012, investment in the housing sector by businesses and households (known as residential investment in the GDP accounts) was nearly flat in 2018 (Figure 1).[i] Myriad factors weighed on the housing market last year, including the upward climb in interest rates, impacts of tax reform, and elevated house prices (in part due to tariffs on key commodity prices and high construction labor costs due to tight labor markets). Though housing’s contribution to growth tends to be relatively small on average compared to other components of GDP, it tends to be watched by investors because of its cyclical nature and the signals it might be sending about the overall economic cycle. Interest in housing activity has been amplified in recent years given the sector’s key role in precipitating the Great Recession, as investors try and gauge how long the current expansion can continue. As noted in an earlier Wilmington Wire blog post, (“The Housing Market: To worry or not to worry?”), though sales of both new and existing homes turned negative last year on an annual basis for the first time since 2013, we expected the cooling of the housing market to have a contained impact on GDP growth in 2018.

Recent signs of recovery in housing market activity suggest that the housing market in 2019 could be a mild potential tailwind for GDP in 2019, rather than a headwind as it was in 2018. Sales of newly built homes turned positive on a year-over-year basis for the first time in six months in March, and builder sentiment appears to have troughed in early 2019, after a sharp pullback in late 2018. Indicators of future sales of existing homes have improved as well. While some of the factors that contributed to the weakness in the housing market in 2018 continue to persist (tax reform, robust construction sector wage growth), others have ameliorated (interest rates, house prices, prices for tariffed commodities). A bottoming of the housing sector would bode well for a modest potential upside boost from business investment in housing in 2019, though risks to the nascent recovery in housing will be important to watch.

Figure 1: Business investment in the housing sector made almost no contribution to GDP growth in 2018

Sources: Macrobond, Bureau of Economic Analysis. Data as of December 31, 2018.

Consumer demand for housing should have been on solid footing to start the year in 2018, with the unemployment rate near cycle lows and solid wage growth. However, interest rates climbed in tandem with the Fed’s tightening of monetary policy and the economy’s solid growth trajectory over the course of the year. With 30-year mortgage rates rising significantly (Figure 2), the increased cost of homeownership dampened demand. 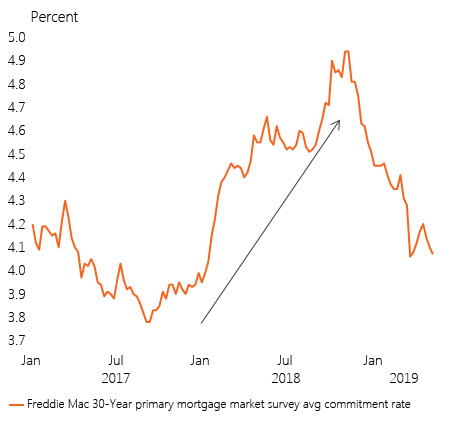 The authors highlight that one key difference in the current period relative to the past periods being compared was the enactment of tax reform in 2018,[ii] which hit demand for new homes, particularly in high tax states.[iii] A look at new home sales data by region suggests that tax reform may indeed have had a dampening effect. The 6-month moving average smoothes some of the erratic month-to-month movements in this data to give a clearer picture of the trend,[iv] and shows that new home sales in the Northeast and West (which include many of the high tax states) have been particularly hard hit since 2018, suggesting that tax reform may have added downward pressure to the housing market last year (Figure 3).

In addition to interest rates and tax reform, house prices saw continued upward pressures in the early part of 2018. Home builders had been constrained by a shortage of construction workers due to tight labor markets. This shortage in turn drove up wages in the industry, which—along with the impact of  tariffs on steel, aluminum, and lumber—increased input costs for builders, all feeding into higher house prices. Along with rising interest rates, this creep up in house prices weighed on affordability, dampening demand­­­­­ for homes.

Tentative signs of respite for the housing market

While the headwinds of tax reform and firm construction sector wages remain in place in 2019, a number of other drivers of the housing market have become less of a weight on the housing market. First, interest rates have eased significantly since their peak in November of last year, retracing a significant part of their move up since late 2017 (Figure 2, as the Fed paused its tightening cycle in 2019. Second, lumber, steel, and aluminum prices have moderated as markets have begun to adjust to tariffs. Third, though house prices continue to rise, they are rising at a slower pace, now +3.0% y/y as of February 2019, compared to +6.7% y/y at their peak a year ago (Figure 4).

How has housing market activity responded so far? A number of indicators have begun to show early signs of improvement, including new home sales, existing homes sales, pending home sales (a leading indicator of existing home sales), and mortgage applications for home purchases (Figure 5). Most of these indicators (with the exception of mortgage applications) are still growing at a slower pace relative to a year ago, but the pace of declines has begun to moderate. Additionally, though trend in the number of building permits issued for new homes and new housing units started continues to remain sluggish, the rebound in home builder sentiment since the start of 2019 suggests that builders are becoming more confident about prospects for the housing market going forward (Figure 6).

Figure 5: A number of housing activity indicators are showing early signs of improvement 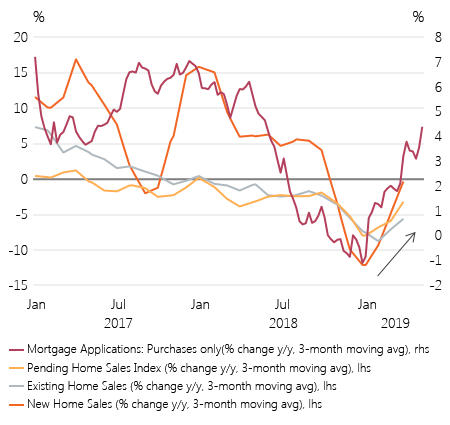 Sources: Macrobond, Census Bureau, National Association of Home Builders. Data as of May 2019 for NAHB Index of Builder Sentiment, April 2019 for Building Permits and Housing Starts.

A tentative upturn in a number of housing market indicators suggests the recent moderation in interest rates, house prices, and tariffed commodity prices could help stabilize residential investment this year. We look for U.S. GDP growth to be slower in 2019, but to remain at a still-solid pace of 2.0%, driven by a moderation in the pace of consumer spending and business investment (in equipment, software, and intellectual property) as the impacts of tax reform fade. A potential recovery in the housing sector could provide a modest boost to GDP in coming quarters.

Risks to the nascent stabilization in the housing market remain though. The dampening impacts of tax reform and firm construction labor costs remain in place. Though not our base case, if recently elevated trade tensions weigh materially on consumer spending and business investment, as discussed in the recent blog post, “U.S. –China Trade and Tariffs: A Deteriorating Outlook,” the Fed’s stance could change. But dampened consumer sentiment would then likely weigh on housing demand if households decide to put off purchases until they are more certain about the economic outlook. We currently remain neutral on U.S., international developed, and emerging markets equities, as we await more clarity on the U.S.–China trade relations.

[ii] The Tax Cut and Jobs Act of 2018 introduced measures that lower the amount of mortgage debt that is tax deductible, down to $750,000 from $1,000,000 previously. In addition, whereas previously property taxes had no limit on tax deductibility against federal income tax, now there is a limit of $10,000 total for the combined deduction of property, and state and local taxes. The standard deduction was also doubled, which may reduce the number of taxpayers itemizing deductions (and therefore using the mortgage interest deduction).

[iv] Month-to-month changes in new home sales data are very volatile, and these moves can be even more pronounced depending on the region (with the Northeast historically seeing the widest range of month-to-month changes). These new home sales data often see large revisions, because they are recorded at signing of sales contracts or acceptances of deposit. Existing home sales data, in contrast, are recorded at contract closing; but because they capture activity at a later stage of the cycle, tend to be more of a lagged indicator of housing activity. New home sales tend to lead existing home sales by about one month on average, but overall trend is the same.